Radio-Frequency Identification (RFID) is a commonly used technology for communication via alternating electromagnetic fields.  There seems to be quite a bit of interest in understanding how does the “handshake” or initialization process between two RFID devices work.   In this article, we will be discussing the handshake process between a passive RFID transponder and a Proximity Coupling Device (PCD) of a Host Device.  The handshaking is based on Near Field Communication (NFC) technology; however it may be applicable to other RFID technologies such as, for example, ISO/IEC 14443, ISO/IEC 10536, or ISO/IEC 15693.

Unlike the passive RFID transponder, an active RFID transponder has its own power source and responds by generating its own 13.56MHz carrier field and performing modulation on it to superpose the data for communication with the PCD. 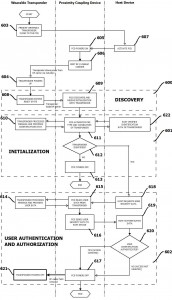 I tried to make the technical content of this article as accurate and up-to-date as possible.  If you have any further comments or suggestions, please contact us.